The Economy is Sliding - 20 concrete points which prove that. 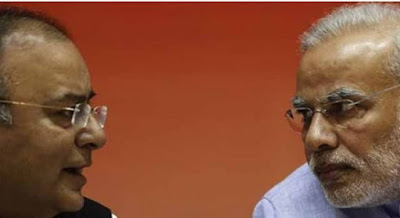 20 months have passed, since the Mr. Narendra Modi led BJP Government came to power, but he yet behaves as a leader in opposition clamouring for power. Wherever he goes, instead of apologizing for the misdeeds of his own Government, he yet repeats his parroted lines of blaming the opposition, especially the Congress party for everything. Recently, in a public meeting in Coimbatore, he said  "The opposition parties are showing their anger against the government in the Rajya Sabha by blocking schemes that would benefit the poor,"

While he has miserably failed to deliver on any front that deals with welfare and relief to people, he constantly tries to play petty politics in an unending electoral campaign.
Following are some worrying statistics which prove the disastrous track record of this Government in managing India’s Economy- :

1)      The Indian Economy grew at just 7.2% in the first half of the financial year 2015-16, while it grew at 7.3% in the entire financial year of 2014-15. The economic growth remained flat in the 20 months of the Modi Government. This is after the base year to calculate the GDP was revised so as to increase the numbers.

2)    The Index of Industrial Production recorded a negative 3.2 which is the lowest in four years. This is the very barometer of PM's “Make in India” dreams which is turning out to be a mere slogan just as everything else.

3)    Purchasing Manager Index fell below 50 which formally signifies that there is contraction in the manufacturing sector.

4)    2015 saw 6 months of FII outflows from capital markets, the worst since the global 2008 financial crisis. More than Rs 11126 Cr was withdrawn in the month of January, this year- worst since past 8 years.

11)  Freight Volumes by rail and sea are stagnant.

14) New projects worth only Rs. 1 lakh crore were announced in the December 2015 quarter, down from Rs. 4 lakh crore in December 2014.  This is the lowest in the past 5 quarters.

17) 1 million Indians entering job markets in India have no opportunities. Jobs have contracted.
18) There has been a windfall advantage of a historic low in the prices of international crude, but the benefits of this are not been passed on to the consumer.

19) The Government talks about Make in India but the driver of manufacturing in India which is the SME sector not receiving lending.

20)   Under MGNREGA, instead of a 100 days only an average 39.98 days of employment is been made available to workers, despite severe rural distress

A greater cause for concern is that since it came to power the Modi Government has systematically neglected and weakened the social sector schemes which had been put in place by previous Governments. These schemes and programmes were aimed at helping the poorest in India.

A few may recall the current PM’s fondness, in 2013, of asking whether the rupee will fall to a point where it exceeds the former PM Dr. Manmohan Singh’s age. In an ironic twist of fate, the rupee has, on his watch, fallen past the ages of the current PM and the FM. At the rate at which it is going, it won’t be surprising if it crosses the ages of the veterans he has retired to the BJP’s margdarshak mandal.

April 04, 2016
Major Welfare and Development Achievement of UDF Government
After Assam and Bengal, here is a ready reckoner for Kerala. As Congress Supporters, we should spread it far and wide. Compiled from official sources.

Economic growth higher than national average
Based on current price, Kerala's economic growth has been 17% compared to the national growth rate of 17.5%. In 2011-12, Kerala registered 17% (India 15%), in 2012-13 it was 13% (India 13.3%), 2013-14 it was 13.4% (India 11.5%) and in 2014-15, Kerala registered a growth rate of 12.3% compared to the national growth rate of 10.50%.
Work Commencement of Vizhinjam International Seaport
Work has begun on the country's only deep-sea multipurpose container transshipment port. The Rs 5552 crore project will be completed in 1000 days. The Union government has provided Rs 817 crore as viability gap fund. On completion, the port, situated 10 nautical miles from international shipping channel will be able to handle container ships of 180…
9 comments
Read more

September 05, 2011
Nitin Gupta (Rivaldo) has written a letter to Rahul Gandhi asking some questions.
Many of you might have come across this Letter on Facebook.

THIS IS A REPLY TO MR. NITIN GUPTA (IIT STUDENT) BY AN AAM AADMI
-WITH CREDIBLE EVIDENCES !


Nitin Gupta Writes :ON Rahul Gandhi: "I feel ashamed to call myself an INDIAN after seeing what has happened here in UP".

REPLY: In Uttar Pradesh, Congress under Rahul Gandhi became the No.2 Party with 21 MP's and currently stands at No.1 Position with 22 MP's , after Election 2009. Simple wikepedia can verify this fact

Nitin Gupta Writes :* First Ask Pranav Mukherjee, Why isn't he giving the details of the account holders in the Swiss Banks.

It is indeed an honour to address this Conference-in itself a fresh expression of the spirit which created the United Nations-concern for the present and future welfare of humanity. It does not aim merely at securing limited agreements but at establishing peace and harmony in life-among all races and with Nature. This gathering represents man's earnest endeavour to understand his own condition and to prolong his tenancy of this planet. A vast amount of detailed preparatory work has gone into the convening of this Conference guided by the dynamic personality of Mr. Maurice Strong the Secretary General.
I have had the good fortune of growing up with a sense of kinship with nature in all its manifestations. Birds, plants, stones were companions and, sleeping under the star-strewn sky, I became familiar with the names and m…
2 comments
Read more