How Demonetisation has Abetted the Fake Currency Racket 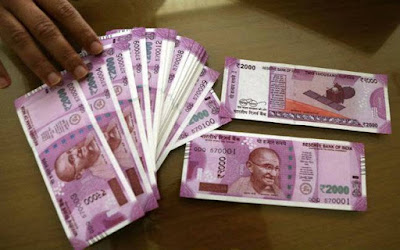 On November 8, 2016, when the Prime Minister Narendra Modi announced the withdrawal of the legal tender of currency notes of denominations of Rs 500 and Rs 1000- he claimed that this exercise would prevent the funding of terrorism by the use of fake notes. Substantial part of his speech emphasized that the aim of this decision was to end the circulation of fake notes and thereby curb terror funding.  Barely two months down the line, it has now emerged that this bogey of Shri Modi, which the common man believed and stood in long queues for is a big fat lie. As per various media reports and recent arrests, it has now surfaced that Pakistan-based counterfeiters have come out with fake Rs 2000 notes which were pushed by smugglers through the porous India-Bangladesh border.

The latest seizures were made on February 8 in Murshidabad from one Azizur Rahman (26), who belongs to Malda in West Bengal. Rahman, who was carrying 40 fake notes of Rs 2,000 denomination, told investigators that they had been printed in Pakistan, allegedly with the help of the Inter Services Intelligence (ISI), and had been smuggled across the border from Bangladesh.

Even as the 125 crore people of India were queuing up in lines infront of banks, facing every hardship possible, believing the solemn words of Modi, who promised to ‘fight terrorism and fake notes’, the ISI was printing fake notes and smuggling it to India.

Even as more than 120 plus people died because of the unending chaos and distress unleashed by demonetisation, the deep state in Pakistan which is inimical to India was planning their next move by copying 11 out of 17 features of the new notes and readying the counterfeit currency to be circulated for abetting terror.

Even as the common man struggled to withdraw his/her own hard earned money from the banks in Rs 2000 denomination, Pakistan’s ISI only required half the quantity and half the speed to counterfeit the same amount of notes to fund terror in India.

While announcing the unwitting decision of demonetisation, Modi had stressed “Terrorism is a frightening threat. So many have lost their lives because of it. But have you ever thought about how these terrorists get their money? Enemies from across the border run their operations using fake currency notes. This has been going on for years. Many times, those using fake 500 and 1,000 rupee notes have been caught and many such notes have been seized.” But the recent arrests of in Murshidabad and Malda have busted this bubble of Shri Modi.

In his 4205 word 'Address to the Nation' announcing Demonetisation, atleast 250 words were solely dedicated to fighting fake currency and terrorism

Shockingly, the seized notes have showed that at least 11 of the 17 security features in the new Rs 2,000 notes had been replicated. They included the transparent area, watermark, Ashoka Pillar emblem, the letters ‘Rs 2000’ on the left, the guarantee clause with the RBI governor’s signature and the denomination number in Devanagari on the front, the report says. According to experts, the motif of Mangalayan, the Swachh Bharat logo and the year of printing had been copied on the reverse side. Although the print and paper quality of the seized counterfeits was poor, they resembled genuine notes, it says. Besides, the seized notes had the water mark and a crackling sound, similar to genuine currency, various media reports say.

It is important to note that the Union Finance Ministry had informed a Parliamentary Committee that smuggling of fake currency has totally stopped post demonetisation and the tax department has seized Rs 515 crore in cash, including Rs 114 crore of new currency notes, up to January 10. Tall claims of Modi and his Ministers that ‘fake currency circulation is an issue of the past’ have however evaporated in thin air.

A grave National Security threat has now emerged and a serious situation has precipitated due to this arbitrary step of demonetisation. Terrorists and the ISI who was printing a certain amount of Rs 1000 currency notes now have to print just half the quantity of Rs 2000 notes of the same amount.

The largest share of the Fake Indian Currency Notes (FICN) that circulates in India is believed to be originating not from nondescript local presses inside the country, but from high-grade, state-owned minting factories in Pakistan. There is a mountain  of evidence, made public by international agencies including the National Investigation Agency (NIA), Financial Action Task Force (FATF), and Interpol have pointed fingers at the Government of Pakistan for creating and sustaining a transnational FICN racket that spans from West Asia to Southeast Asia. A day after the demonetisation policy was made public, Kiren Rijiju, the Union minister of state for Home Affairs, boastfully stated that the “the printing press in Karachi and Peshawar will now be jobless” as a result of demonetisation”

However, RBI officials on record had confirmed earlier that the new notes do not carry any new security features.

In addition, till date, the Government of India through the Security Printing and Minting Corporation of India Limited (SPMCIL), imports a bulk of the paper used in minting currency notes from European companies like Louisenthal (Germany), De la Rue (United Kingdom), Crane (Sweden,) and Arjo Wiggins (France and Netherlands). So does Pakistan. India imports the OVI Intaglio security ink — a distinctive security component of every currency note — from SICPA, a Swiss company that manufactures high-performance security ink; and it is a known fact that SICPA also deals with Pakistan.

Therefore, it is fair to say that the Modi Government by its demonetisation decision has effectively abetted the circulation of fake notes, instead of preventing it. Now the counterfeit currency printing presses in Pakistan can print the same amount of money in lesser numbers which is much easier to smuggle, thereby cheating the people of India.

It is important to draw the attention of the people of India to this humongous blunder committed by PM Modi and his Government. Let Narendra Modi voice another ‘address to the nation’ and publically apologize to the people of India for endangering India’s National Security apparatus and inflicting such misery and pain to the 125 cr people of India.

April 04, 2016
Major Welfare and Development Achievement of UDF Government
After Assam and Bengal, here is a ready reckoner for Kerala. As Congress Supporters, we should spread it far and wide. Compiled from official sources.

Economic growth higher than national average
Based on current price, Kerala's economic growth has been 17% compared to the national growth rate of 17.5%. In 2011-12, Kerala registered 17% (India 15%), in 2012-13 it was 13% (India 13.3%), 2013-14 it was 13.4% (India 11.5%) and in 2014-15, Kerala registered a growth rate of 12.3% compared to the national growth rate of 10.50%.
Work Commencement of Vizhinjam International Seaport
Work has begun on the country's only deep-sea multipurpose container transshipment port. The Rs 5552 crore project will be completed in 1000 days. The Union government has provided Rs 817 crore as viability gap fund. On completion, the port, situated 10 nautical miles from international shipping channel will be able to handle container ships of 180…
9 comments
Read more

September 05, 2011
Nitin Gupta (Rivaldo) has written a letter to Rahul Gandhi asking some questions.
Many of you might have come across this Letter on Facebook.

THIS IS A REPLY TO MR. NITIN GUPTA (IIT STUDENT) BY AN AAM AADMI
-WITH CREDIBLE EVIDENCES !


Nitin Gupta Writes :ON Rahul Gandhi: "I feel ashamed to call myself an INDIAN after seeing what has happened here in UP".

REPLY: In Uttar Pradesh, Congress under Rahul Gandhi became the No.2 Party with 21 MP's and currently stands at No.1 Position with 22 MP's , after Election 2009. Simple wikepedia can verify this fact

Nitin Gupta Writes :* First Ask Pranav Mukherjee, Why isn't he giving the details of the account holders in the Swiss Banks.

It is indeed an honour to address this Conference-in itself a fresh expression of the spirit which created the United Nations-concern for the present and future welfare of humanity. It does not aim merely at securing limited agreements but at establishing peace and harmony in life-among all races and with Nature. This gathering represents man's earnest endeavour to understand his own condition and to prolong his tenancy of this planet. A vast amount of detailed preparatory work has gone into the convening of this Conference guided by the dynamic personality of Mr. Maurice Strong the Secretary General.
I have had the good fortune of growing up with a sense of kinship with nature in all its manifestations. Birds, plants, stones were companions and, sleeping under the star-strewn sky, I became familiar with the names and m…
2 comments
Read more